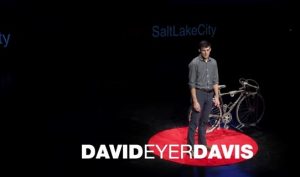 For most, the thought of bicycles evokes images of sustainable transportation and the Tour de France. David (Davey) Eyer Davis, however, sees much more. To him, bicycles are a means of engaging in activism, achieving social justice, providing education and fostering self-sufficiency.

Davis, who is executive director of the Bicycle Collective, credits the University of Utah’s Honors College for many of the experiences and skills that have led him to his current position.

“Everyone who leaves the Honors College will have a different career path, but Honors prepares everyone equally. Honors provided me with a gamut of skills and approaches that have not only helped me with my current job, but will be applicable in whatever jobs I pursue in the future,” said Davis.

“When I finished high school I said to myself, ‘I’m going to the U and want the best educational experience possible.’ I was ok with challenging myself as long as I got the opportunity to do more, and that’s exactly what I got. During my time at the U I was able to create a film series with professors and advisors who knew me by name and truly cared for me,” said Davis.

Davis still benefits from the relationships he built in college and keeps in touch with those who mentored him, such as his honors thesis advisor Paul Paret.

“The Honors College provided the environment of a small college within a large university. I wouldn’t have had the same connections without that environment in place,” said Davis.

While at the U, Davis also ran a small media company which led him to making a documentary while working on his Honors thesis, an art journalism piece about global art, local art, what it takes for artists to make a broader impact and an analysis of whether what it takes is worth it.

Combined with the close-knit environment and the experience of conducting independent research, the interdisciplinary classes Davis took as an honors student, such as a Documentary Human Rights and Social Justice Praxis Lab provided him with skills such as critical thinking and that he would eventually use in his professional career.

After graduating from the U in 2009 with an honors bachelor’s degree in art history, Davis looked for work that would allow him to travel.

In 2011 Davis spent seven months working in Palestine, including with Project Hope, a nonprofit which pairs international volunteers with locals based on compatible skill sets. Davis and his local counterpart taught a film course to children in a refugee camp, teaching skills such as how to create films on smart phones and how to upload and edit them online. After his time with Project Hope, Davis lived in Haiti for a month where he created daily short films with local communities to be screened at local events.

“Eventually, though, I asked myself how I could most effectively contribute to real change. I didn’t want to feel like a volun-tourist; I wanted to make a tangible difference, so reevaluated how and where I could best do that.”

Davis decided that he could best effect change by moving back to the US and engaging in the creative pursuits that drove him as an undergraduate. Davis spent the next two years in New York, where he did freelance documentary work while traveling to Utah every winter for the Sundance Film Festival. Davis worked on “The Square,” a Sundance film which won the Sundance audience award for world cinema in the documentary category, as well as three Emmys.

It was then that he wrote a profile piece for SLUG Magazine on the Bike Collective’s then-Executive Director. The position and the Collective’s potential to create equity and promote social justice intrigued Davis, who discovered the position would be available in the near future. He applied, and returned to Salt Lake.

Since Davis became its executive director three and a half years ago, the Bike Collective has grown from six to 26 employees and tripled its budget.

“Unlike traditional nonprofits which generally focus on one area, the Bicycle Collective focuses on all the aspects of life, thanks to the diversity of impacts bicycles have: vocational, educational, health, transportation, environmental and much more. Think of bicycles like computers. Computers enhance our lives in so many ways. In the same way that computers can polish problem-solving skills, improve one’s self image and be a source of education, bikes can achieve similar results. By building a bike or teaching others how to build one, you gain technical problem-solving skills, as well as a sense of empowerment,” said Davis.

The Bicycle Collective is an upcycling factory which receives bike donations, refurbishes those bikes for members of the community and provides space and resources for those who want to volunteer to fix bikes or work on their own. Each year, the collective refurbishes around 3000 bikes and provides over 800 adults, primarily refugees, with bicycles through a referral program.

An example of how the Bicycle Collective promotes education, social justice and marketable skills is its 12-week Juvenile Justice program. Through this program, Bicycle Collective employees teach eight children in juvenile detention how to fix bicycles. Those bicycles then return to the Salt Lake community. After completing the program, each child receives a voucher for a free bicycle.

“Davey Davis was super interdisciplinary and community engaged as an art history student. He’s high energy and not afraid.  It’s no surprise that’s he’s been giving so much back through the Bike Collective and is working with current honors students,” said Paul Paret, associate dean of the Honors College and Davis’ honors thesis advisor.